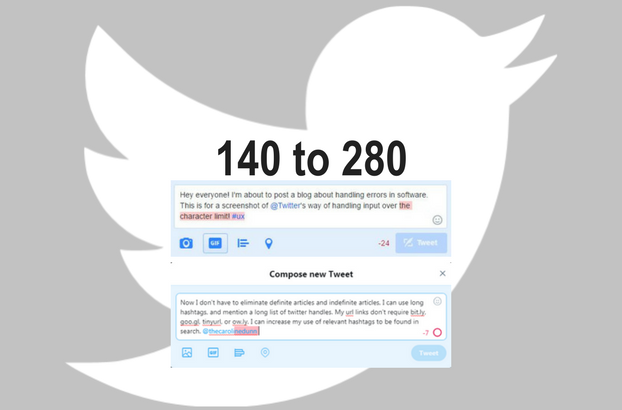 Today Twitter doubled the number of characters in your tweet. Twitter users thrive on the challenge of creating a short and concise message that drives engagement. Now the message can include twice the content.

Here are some of the edits required when bringing your tweet down to 140 characters. The first edits (using the above image as an example) to minimize the error of being over by 24 characters started with using an ampersand instead of ‘and’. Then removing definite articles and indefinite articles. Punctuation was eliminated or the use of a dash for incomplete sentence structure. Anything, including grammar, was sacrificed in order to submit the tweet.

Other challenges with the 140 character limit included mentioning sponsors for event tweets. When limited, the use of the reply feature permitted a way to add the other company handles. Long hashtags were discouraged. Now with twice the character amount, we can use long and include other relevant hashtags. Another feature often not used is the Twitter Twemoji (emoji images). Don’t be surprised if you see more tweets with Twemojis.

Is it possible we will adapt to this character length and wish for more in a year, two or three? I hope we keep the microblogging site as limited as possible or Twitter will no longer be classified as a micro newsfeed differentiating itself from the other social media networks.

With this change, Twitter users are pointing out an overdue ‘edit button’. Currently, if you want to edit a tweet, you have to delete the tweet and create a new tweet. You can edit Facebook posts and LinkedIn posts. Is Twitter listening? Will they respond to what their users have been patiently waiting for?

Tier4 has over 600 IT service partners. We listen to our clients and provide the right solution for your IT procurement project. We pride ourselves in keeping up with the rapidly changing landscape on vendor solutions that help you succeed at your job as an IT professional. Contact us to learn how we can help you be a rockstar in your organization.